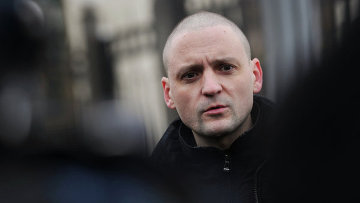 The Moscow City Court rejected on Monday a motion filed by the leader of Russia’s Left Front opposition party Sergei Udaltsov seeking to overturn his house arrest order, RAPSI learned in the courtroom.

Udaltsov has been accused of clashing with police and instigating riots during a protest on May 6, 2012 in Moscow’s Bolotnaya Square on the eve of Vladimir Putin’s inauguration for a third presidential term. The rally ended in clashes between protesters and the police. Over 400 people were arrested and scores were injured when protesters briefly broke through police lines.

Udaltsov is being prosecuted as a result of a probe into the highly controversial “Anatomy of Protest 2” documentary film which was shown on the NTV broadcasting network. The film claimed that the opposition was organizing a coup using funds from abroad.

In October 2012, Udaltsov was ordered not to leave Moscow. On February 8, for allegedly violating the order investigators requested to have him placed under house arrest.

He asked the court to release him on bail or to mitigate his house arrest by way of travel restrictions.

Earlier Leonid Kovyazin, Vladimir Akimenkov and Yaroslav Belousov, who are also suspected of being involved in the Moscow riots case, filed an application with the European Court of Human Rights protesting their lengthy detention terms and allegedly inhumane confinement conditions.