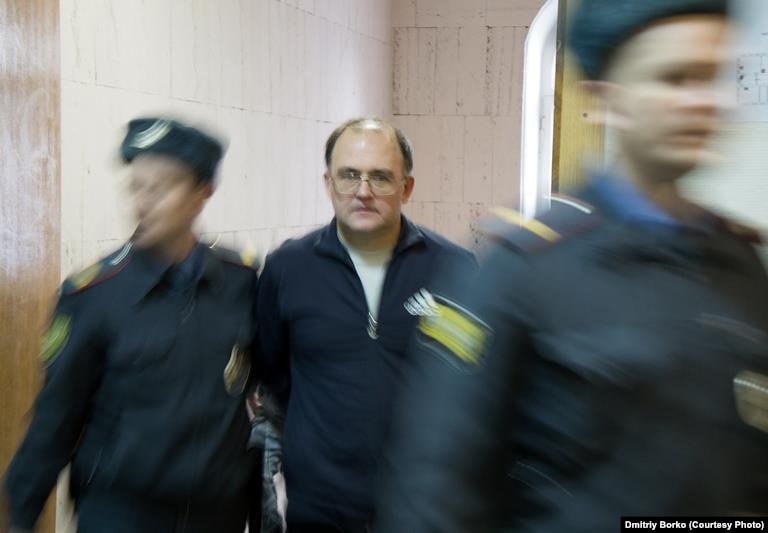 Concern is mounting over Sergei Krivov, one of over 20 people charged with assaulting police during an opposition rally in Moscow last year.

Krivov has been on hunger strike now for 50 days to protest what he says are violations of his right to a fair trial in the so-called Bolotnaya case, named after the square where a sanctioned antigovernment protest on May 6, 2012, erupted in violent clashes with police.Krivov, who at 52, is one of the oldest defendants in the case, appeared gaunt and frail at his last hearing on November 5.

According to his lawyer, Vyacheslav Makarov, he has been refusing food since September 19 and is having difficulty walking and even speaking.

Makarov says the drawn-out trial, which requires his client to attend hearings roughly three times a week at a Moscow court, is taking a heavy toll on his health:

“He spends a lot of time being brought to court. He sits in a relatively small cell during the trial,” Makarov says. “The same procedure as when he is brought to the Mikulinsky court takes place on the way back and like the others, he returns to his pre-trial detention center only around midnight. There is almost no time to rest, he is woken up at 6 a.m. the next day. It’s taxing even for someone who is in good health.”

Makarov accuses authorities of failing to provide Krivov with all the transcripts of the hearings, crucial to his defense. Transcripts that are delivered can take up to six weeks to reach the defendant.

Makarov says he is also routinely denied the right to formulate requests in court.

He nonetheless hopes his client will be granted the right to lie down during the hearings to spare his strength.

Despite Krivov’s frail condition, prison authorities have ruled that he is healthy enough to appear in court and, according to Makarov, are denying him suitable medical supervision.

“When a person is on a hunger strike for more than 40 days, you can already describe his health as weakened,” Makarov says. “He needs to undergo a thorough medical examination, and not a superficial one based on whether or not he can stand on his feet without falling over.”

The plight of Krivov – who cared for his two young children and his disabled mother before being jailed – has supporters and rights campaigners deeply worried.

Bobby Sands, the famous Irish Republican Army member who died in 1981 after a hunger strike in a British prison, succumbed after just 66 days without food.

Nadezhda Mityushkina, a member of the opposition Solidarity movement, first met Krivov when he joined the group in 2011.

She describes Krivov, who was mainly involved in distributing leaflets and flyers, as a quiet, hardworking man deeply committed to his values.

She says she fears for his life and laments the lack of support in Russia for the Bolotnaya defendants.

“I think we need to make as much noise as possible about Sergei and about political prisoners more generally, to fight for them with all the means at our disposal,” Mityushkina says. “But unfortunately, many people in Russia believe that if a person is in prison there is a good reason for it. I would like to tell these people: take to the street, show your support, scream, [and] don’t be silent!”

A total of 25 people are currently under investigation or charged in the Bolotnaya case, which has come to symbolize the ruthless tactics employed by the Kremlin to quash a wave of protests.

The first demonstrator to be tried, Maksim Luzyanin, was sentenced to 4 1/2 years in prison after cooperating with investigators and pleading guilty.

The second, Konstantin Lebedev, was given 2 1/2 years, also after pleading guilty.

All the other defendants deny wrongdoing.

Seventeen are currently in pretrial detention, three under house arrest, and one has fled the country.

Mikhail Kosenko, who suffers from a mild psychiatric disorder after sustaining a trauma during his military service, has been forcibly sent to a psychiatric clinic despite a police officer who was allegedly hurt by Kosenko testifying in his defense.

Supporters of the Bolotnaya defendants were scheduled to hold a picket on Moscow’s Red Square on November 6 to call for their release.