Mikhail Kosenko convicted despite footage showing he was not violent during anti-Putin protests in Bolotnaya Square last year. 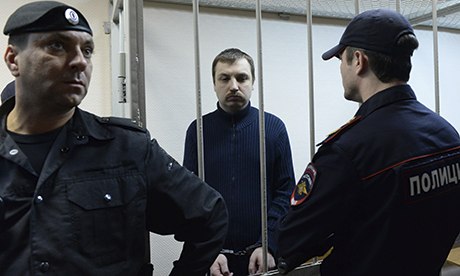 Mikhail Kosenko has been convicted for ‘calling for mass riots’ on the eve of president Vladimir Putin’s inauguration. Photograph: Vasily Maximov/AFP/Getty Images

A Moscow court sentenced a 37-year-old man to an indefinite term of forced psychiatric treatment on Tuesday in a case that rights activists say was fabricated and part of a crackdown on the street protest movement that has emerged in the past two years.

Mikhail Kosenko was one of 28 people arrested after clashes during a rally in central Moscow last year, the day before Vladimir Putin was inaugurated for a new presidential term. Although police officers were injured, the court heard that Kosenko was not involved in the violence.

The conviction for “calling for mass riots” came despite video footage showing Kosenko as a bystander to scuffles between police and protesters. Additionally, the officer named as the victim in the case, Alexander Kazmin, refused to identify Kosenko as the person who attacked him. “I do not know this person,” he told the court during a hearing over the summer.

The trials of those arrested over the scuffles on 6 May 2012 have become known as the Bolotnaya affair, after the square in which the clashes took place. Late last year, Maxim Luzyanin was jailed for four-and-a-half years for his part in the protest, while a further 26 people face sentences of up to 13 years if convicted of taking part in, or provoking, mass disturbances.

Putin said recently he could not rule out an amnesty of those involved in the case, which analysts say has been pursued with such zeal in order to discourage street protests against the regime.

Kosenko’s case has appalled rights activists who say it is unclear why he was held separately in psychiatric carewhile awaiting trial, a punishment that echoes the Soviet practice of confining dissidents to mental institutions. He was not even allowed out to attend the funeral of his mother.

Kosenko suffers from a psychiatric disorder that resulted from concussion sustained during his military service but has received outpatient treatment for more than a decade and has never fallen foul of the law.

Nevertheless, the court decided he was not of sound mind and ruled that he should be confined to a psychiatric ward. During his final words to the court Kosenko said he was of sound mental state. Amnesty International has declared him a prisoner of conscience.

In the packed courtroom, Judge Ludmila Moskalenko murmured her way through the verdict for two hours, her voice frequently drowned out by chants of “freedom” from hundreds of people gathered in the street outside.

“If someone has committed a terrible crime and is not mentally stable, then there is nothing wrong with psychiatric treatment,” said Oleg Orlov, chairman of Memorial, a leading human rights organisation, outside the court. “But in Kosenko’s case, the evidence proved absolutely 100% that this man had nothing to do with the crimes he is accused of. He did not hit or kick anyone.”

Orlov added that he had grave doubts about whether Kosenko’s medical condition required forced treatment, given he had been living a normal life for years.

Those present to show their support for Kosenko included members of the protest movement who had been at Bolotnaya Square on the day of the protest as well as a number of older Soviet-era dissidents, some of whom had been subjected to forced psychiatric treatment. The veteran dissident and human rights campaigner Ludmila Alexeyeva left the courtroom in tears.

After sentencing Kosenko, the judge left the courtroom amid shouts of “Shame on you!” and “Send her to prison!”

Kosenko was led away in handcuffs by police to begin indefinite forced psychiatric treatment in a secure unit, until he is deemed to have “recovered”.

Shaun Walker in Moscow. The Guardian.